From bears slumbering in their dens to frogs sinking into muddy tombs of suspended animation, a wide spectrum of animals use hibernation to survive inhospitable seasons.

We tend to associate hibernating creatures with cold, wintry environments – just a mention of hibernation conjures images of snow-blanketed forests and ice-covered ponds. A group of small tropical primates is breaking the trend, however—recent research has revealed that dwarf lemurs in Madagascar hibernate for up to eight months of the year. 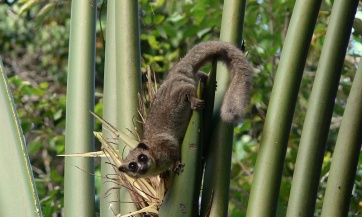 While scientists already knew that that the western fat-tailed dwarf lemur (Cheirogaleus medius) spends seven months of the year hibernating in tree holes (Dausmann et al. 2004), until recently there was no evidence that any other primate species on earth undertakes significant hibernation periods. A recent paper in Nature’s open access journal, Scientific Reports, presents new evidence of hibernation in two other primate species, the Sibree’s dwarf lemur (C. sibreei) and the Crossley’s dwarf lemur (C. crossleyi), both of which occur in east-central Madagascar’s high altitude forests (Blanco et al. 2013). While it may not seem as though primates would need to hibernate on a tropical island, Madagascar’s mountainous regions can indeed experience temperatures that dip below freezing—a significant thermoregulatory challenge for a squirrel-sized primate. Thus, a research group from Duke University Lemur Center decided to see if the overwintering strategies of eastern dwarf lemurs resembled that of the western species.

The researchers managed to trap dwarf lemurs prior to hibernation season, and outfitted each animal with a collar that featured both a radio transmitter and a temperature sensor. The collars allowed the animals to be located after they had retreated to their hibernacula, in addition to tracking fluctuations in body temperature while the lemurs were hibernating.

The researchers found that not only do these tropical lemurs hibernate for 3-6 months out of the year, the arboreal creatures actually spend their hibernation underground, despite their lack of adaptations for a fossorial (digging and burrowing) lifestyle. The lemurs nestled 10-40 cm (4-16 inches) beneath a the forest’s floor of secondary roots and humus, no small feat for an animal that appears to be optimized for life in the treetops. Each lemur denned up alone, and they used just one or two hibernacula sites per season.

This underground hibernation habit is intriguing; the other lemur species known to hibernate, C. medius, uses tree hollows exclusively. The researchers suggest that this difference in hibernation sites could be partially due to constraints imposed by soil type: soil in C. medius’ habitat is hard and dry, unlike the soft soils of the eastern forests. Another interesting point about hibernacula choice is that the eastern species use tree hollows, rather than burrows, for their normal resting periods during the non-hibernation season, meaning that hibernation is an event with a very specific site selection pattern, rather than just an extended rest in their usual shelters.

Temperature data from the collars showed that C. sibreei and C. crossleyi tend to keep their body temperatures more stable than C. medius, which may highlight another advantage of subterranean hibernation. Soil provides more resistance to ambient temperature fluctuations than hollow trees, meaning that the eastern species are better insulated during hibernation than their western relative.

A final noteworthy aspect of this study is that C. sibreei and C. crossleyi are basal species (less derived than many other species) within their branch of the lemur phylogeny. This raises the question of whether their hibernation patterns may be an ancestral condition for dwarf lemurs. In the mean time, you never know what could be underfoot in the forest . . .

Hi, thanks for checking out Endless Forms! Stay tuned to this blog for news and views on new discoveries and hot topics within the fields of ecology, evolutionary biology, wildlife conservation, and zoology. You can subscribe by clicking the "Follow" button below! Also, consider supporting this blog via Patreon, more information here: https://www.patreon.com/EndlessForms
Join 964 other followers