Part of doing novel scientific research is using creativity to figure out how to measure and analyze things that no one has done before. While many outlets report the results of scientific studies, it is rare to see much reporting about the challenges, roadblocks, and innovative solutions (in other words, blood, sweat, and tears) involved in developing experimental methods. Sometimes, however, researchers do put in the extra effort to tell people about creative solutions they used to answer their study questions.

For example, this video tells the story of Eric Gutierrez, a former graduate student at Stanford University, who wanted to test some common models about how birds create lift during flight. To do so, however, he needed a parrotlet to fly through a field of lasers. This was a concern, of course: even if the lasers didn’t damage the bird’s eyes, the flashes might alter the behavior and movements that Gutierrez sought to measure.

Gutierrez was familiar with “laser goggles” designed to protect eyes from powerful light beams. So, his solution was to cut tiny circles out of human laser goggles and fashion them into a protective headset for his parrotlet (the bird is reportedly named Obi) to wear. Again, check out the video at this link to see his creation in action, and to learn about how his results have overturned common thinking about the mechanics of bird flight. 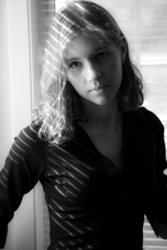 Hi, thanks for checking out Endless Forms! Stay tuned to this blog for news and views on new discoveries and hot topics within the fields of ecology, evolutionary biology, wildlife conservation, and zoology. You can subscribe by clicking the "Follow" button below! Also, consider supporting this blog via Patreon, more information here: https://www.patreon.com/EndlessForms